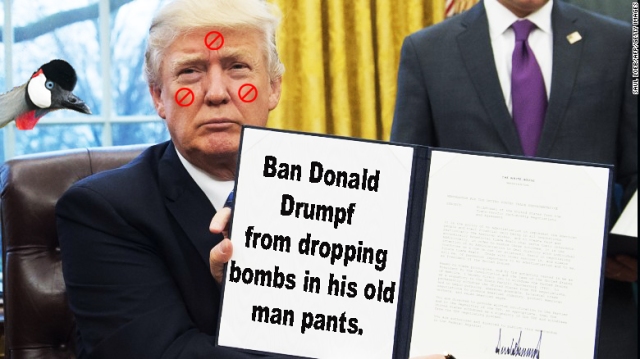 In this critically insightful episode of political stuff Alberotle, Steveocrates and Paulato put to good use their cognitive powers by examining Donald Drumpf’s executive order to instate a temporary travel ban on citizens from seven countries in the Middle East. The main questions that the trio of inquisitive minds attempt to answer are the following:

(3) Why these seven countries?

ASP not only discuss arguments against the travel ban, but also learn that the seven countries have been on the government’s radar since (at the very least) the Bush administration.  Although it still isn’t clear why exactly these countries are targeted as “areas of concern” Wesley Clark, Sr., a retired General of the United States Army confirms in an interview on Democracy Now (published in 2007) that the US Federal government had wanted to “clean up [some of] those old Soviet client regimes…before the next super power comes on to challenge us.”  To conclude this politically charged episode ASP play a game of “What If…” relating to the travel ban and the so-called “vetting process” but in a crudely analogous form: suppose you’re Howard Shultz, CEO of Starbucks, and you learn that 10% of your big, expensive purchase of premium coffee is contaminated with a deadly strain of bacteria.  Do you cancel the order and lose millions of dollars or do you take your chances and risk killing hundreds if not thousands of innocent coffee-fanatic customers?

Finally, it is important to emphasize that refugees have been in general negatively portrayed by the mainstream media and political pundits as a “burden or potential threat.” To trump this misconception, consider what David Androff, an Arizona State University associate professor in the School of Social Work, has to say about his experience working with refugees in the U.S.:

“Refugees love America. In some ways, I feel that they are more patriotic than most      Americans. They want to be here. They’re excited to be here. They know what a great country it is. They have a lot to contribute, and I don’t think it’s right to look at them as a burden or potential threat. They bring incredible diversity in the positive sense of the word. Because they come from another place, they can see the value of America through new eyes, and that’s inspirational. We’re stronger with them here because it’s a reminder too of the strengths of our political and economic systems compared to other places in the world that don’t do it as well.”

Music: “The Machine Stops” by Miseryslims
From the Free Music Archive
Attribution CC BY