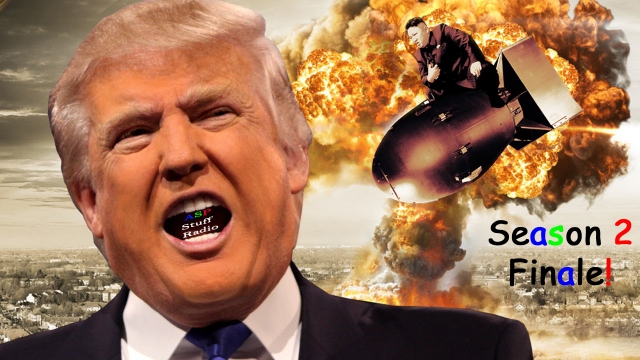 In our season 2 finale (ignore Albertotle, the 48th episode is the season finale) ASP Stuff Radio go nuclear in this episode of explosive stuff! Alberotle, Steveocrates and Paulato discuss some of the reasons, and general historical context, that underlie the North Korean missile crisis, one for which involves a heated verbal fistfight between a “mentally deranged dotard” and a “little rocket man.”  Can we prevent global catastrophe despite numerous failed attempts at diplomatic efforts? Let’s hope so, because according to the Doomsday Clock, it is two and a half minutes to midnight.

To “take a knee” or not to “take a knee,” that is the next “hot” topic the trio of minds debate in light of the recent N.F.L. anthem protests that was fueled by Trump’s condemnation of “sons of bitches” who “disrespect [the] flag.” Paulato calms things down a bit as he highlights some special moments of the San Francisco Giant’s 2017 season despite a poor performance of the team.  Alberotle, Steveocrates and Paulato also share their favorite Matt Cain memory as his career as a Giant has come to an end [insert crying emoji here].

Speaking of endings, ASP conclude the episode with a highly anticipated game of ASP Stuff Battles, between Donald Trump and Kim Jong-un. Whose stylish hairdo do you think would ultimately prevail in a catastrophic nuclear war?  Be sure to cast your vote below or on our Twitter page!

P.S. Stay tuned at the end of this episode to hear Noam Chomsky’s discussion of the U.S. rejecting multiple peace proposals made by China and North Korea in an effort to freeze the North Korean missile and nuclear weapons systems.

Music: “Sonata No. 1 in F Minor, Op. 2 No. 1 – I. Allegro” by Ludwig Beethoven, performed by Daniel Vessel
From the Free Music Archive
Attribution CC BY

Music: “Keg Baseball” by Centz
From the Free Music Archive
Attribution CC BY

Music: “Workdaze” by Nctrnm
From the Free Music Archive
Attribution CC BY